skip to main | skip to sidebar

As always the session begins with a chaotic, but relaxed fiddling with cables, plugs and laptops on stage. The biggest room in the north hall fills up to the last chair. Whe’re of for two hours of the newest and weirdest games of the year, collected by Jonathn Blow and presented by their makers:

This beautiful game is a FPS with a twist. The player has a paintballgun that shoots only black paint. The whole screen starts white. As the player begin to randomly shoot around, the black paint reveals walls, blocks, balls, benches an trees. This is a wonderful pure mechanic that would lend it self perfectly for puzzles, but Dallas felt that would be too obvious. Almost that all new mechanics are first tried out in a puzzle. Inspired by a childrensbook he decided to make a beautiful short story in which the player sees only the traces of a swan in the white world, and has to find it. It is an exploratory paintball game.

Shadow physics
Steve Swink, Scot Anderson (flashbang studios)
In this game the player is the shadow of an avatar that can walk on the shadows of all objects. The player has to find a way from A to B moving on the shadows. To complete a level he can move objects (by pushing their shadows: so Y-ax on one wall, and X-ax on the other), and move around the camera and lights.

Miegakure
Marc ten Bosch
This was probably the weirdest game ever: it is an exploration game, navigating from A to B in a level, but the puzzles have to be solved in 4 dimensions!
I’m not even try to explain this in text, but it really where 4 spatial dimensions. And the weird thing is: after 5 minutes of seeing him play, it didn’t seem all that hard to imagine. After al, like Marc said: as every programmer knows, space is just a list of numbers, so add something to the list and you have another dimension.

Spy party
Chris Heckler
This ‘side-project’ is a game based on the principle of the Turing test, but a bit more complex. Let me explain the game first: it is a multiplayer gamer, set at a cocktail party hosted by the ambassador. One player is a sniper outside the room looking in. He has a mission to kill a double agent but doesn’t know who that is. Most guests are NPC’s, but an other human plays the double agent. The game is: can the sniper distinguish the AI from a human player? Hence the Turing test. 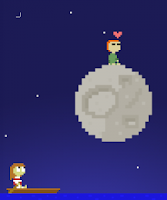 ories
Daniel Benmergui
This is a beautiful storybased puzzelgame. Each level the player gets a short story in a few frames. By moving objects around in one frame, the player can influence the course of events in the later frames. Goal is to create a satisfying ending.

Flower
Jenova Chen, Nick Clark (theatgamecompany)
Everybody knows flower on PS3, right? The makers showed some interesting prototypes. Did you know it had rollercoaster’s at one point?

This in the ‘braid-time-travel-mechanic’ built in RTS. This meant really complicated gameplay, which usually led to a race towards the past. Both players trying to compete by changing history in their favor.

ROM CHECK FAIL
Farbs
In this 2D platformer every character is lend from the famous arcade games. So Mario is there, with some of his enemies, but also the spaceships from spacewar and space invaders etc. and they all keep their abilities. So Mario can run both ways and jump, but the space invader ship can only move from left to right and shoot. Every level, both protagonist and antagonist change. So each level requires a different strategy.

Where is my Heart
Bernhard Schulenberg
This game is a poetry based, up-scroller. It begins with a sad, short poem written by a girl who is committing suicide by drowning right below the poem. You can help her in many ways by changing some words in the poem. (if you change the sentence “this makes me sad” in “this makes me shine”, she will start shining and scare the dangerous creatures threatening her, away)

Closure
Tyler Glasiel
it is basically a platformer with three avatars controlled by the player. Al characters have different abilities and they have to work together to reach the end. To make it abit more interesting Glasiel has cut up the screen like a comic book and put the pieces together in a weird order. So when a character leaves a panel, you it turns up in very unexpected places: going up might result in going down….

Extreme Consequence (rogue-likes)
Derek Yu
this was a seemingly arbitrary collection of rogue like games and a short presentation of a rogue like game he made himself called spellunky-in. It was clear he was intrigued by this genre, but did not succeed in transferring his enthusiasm to me, or show what was special or experimental about his game.

The last presentation was a bit of a dispointment, but I’m not complaining. These where 2.5 hours well spend. My suggestion: play them all!
Gepost door evert hoogendoorn op 06:34